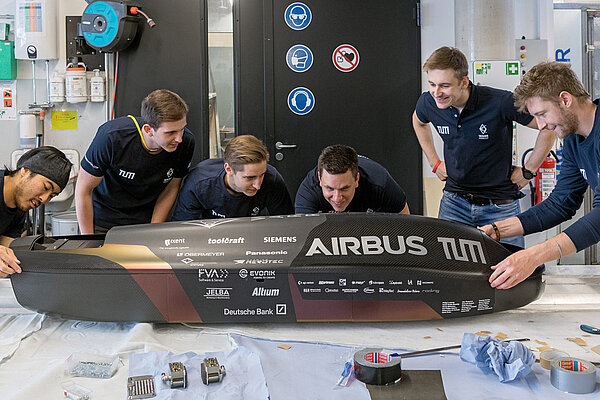 DELO sponsors WARR Hyperloop, the successful Hyperloop team of the Technical University of Munich. The company provides the adhesives used in the pod drive and the DELO Academy supports the team with consulting services and training in bonding technology.

WARR Hyperloop is a working group of students at Technical University Munich, taking part in the SpaceX Hyperloop competition. Tesla CEO Elon Musk is the one behind SpaceX, which has also become known for its reusable space rockets.

Hyperloop is a transportation concept for high-speed trains, similar to the principle of pneumatic tube mail systems. Propelled through tubes, the pods are expected to reach speeds in excess of 1,000 km/h thanks to the low air resistance under partial vacuum. To advance the Hyperloop idea, SpaceX launched an international student competition in 2015.

After a first place in the first to Hyperloop competitions, WARR Hyperloop won also won the third completion with its new pod on July 22. The 2018 pod, which features self-developed drive system, was almost 50% faster than WARR's winning pod from 2017 and set a speed record for Hyperloop prototypes of 467 km/h.

The new pod of the German team required silicate-coated titanium plates to be mounted to the one-piece CFRP monocoque. The titanium plates increase stiffness and improve transmission of braking forces to the structure. CFRP poses major challenges for conventional joining techniques because of its fiber structure. This is where adhesive bonding proves its advantages, especially with being able to join different materials.